Guide To The Temple Of Literature In Hanoi

Long gaining its fame as one of the most ancient sites, the Temple of Literature has been the place everyone can not miss when traveling to Hanoi. With its picturesque campus, traditional construction and historical value, the place has been undoubtedly the symbol and treasure of this 1000-year capital. Our guide to the Temple of Literature in Hanoi will tell you about some information, introduction and tips to the site.

Guide To The Temple Of Literature:

What to wear: no miniskirt allowed, always take off your hat when being in the sanctuary area.

First built in 1070 by King Ly Thanh Tong, the Temple of Literature (Van Mieu) was a holy place to worship Confucious – the Father of Confucian theory, and his four most outstanding students who helped him to spread and develop his theory. The Confucian was highly appreciated by Chinese feudal emperors because it strengthens the loyalty of people to the Kings. Therefore besides Buddhism, the Ly dynasty in Vietnam also promoted Confucian studying to their peoples and regarded it as an important schooling standard.

In 1076, after having succeeded the throne from father Ly Thanh Tong, King Ly Nhan Tong built an academy right after the Temple. This academy was special only for educating royalty. At this time this was called Imperial Academy (Quoc Tu Giam) and became the first university of Vietnam. The King invited all the best teachers to the academy to help educate the royals to become good future owners of the reign.

In 1253, King Tran Thai Tong opened the academy to everybody and turned this place into the cradle of talented people.

In 1484, King Le Thanh Tong started to build stone stelae to appreciate the most outstanding doctors. To recruit talented people, the King opened national exams which were normally held every three years. The top three people who got the best results were called doctors and chosen to work as officers in the dynasty. The stelae were placed on the backs of stone turtles. This is because the turtle is one of the 4 holy animals in Vietnamese culture. Turtle symbolizes wisdom and longevity. It made a great meaning to the education and training at that time.

From 1947 to 1954, the parts of the Temple of Literature were demolished my French people to make room for wounded soldiers because all the hospitals were full. Now it has been rebuilt based on the original architecture. 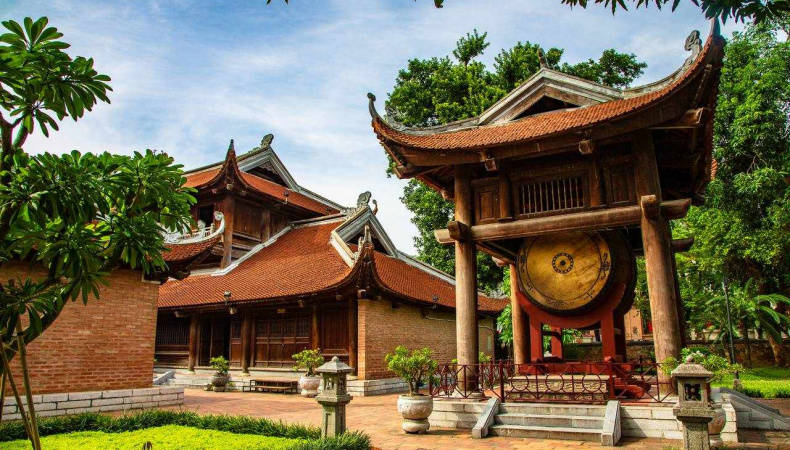 Undergoing the ups and downs of history, now the Temple of Literature has remained the main architecture from Le (15th century) and Nguyen Dynasty (19th century). The whole complex is divided into five sections including Nhap Đao Courtyard ̣(Entrance to the Way); Thanh Dat Courtyard (Great Success); Garden Of Doctor Stales; Dai Thanh Courtyard and Thai Hoc Courtyard (Student’s House). Each section has three gates and contains unique and highlighted features. Now we will reveal about things you must see when visiting the Temple Of Literature:

The great portico was rebuilt in the early 20th century. The gate was built by bricks and include three doors with eight roofs. The middle gate is big with a sentence of Chinese written on it: Van Mieu Mon (Gate of Temple Of Literature). In front of the portico, there are two dragons dating back to the 15th century under the Le Dynasty. And in the back there are another two dragons from the Nguyen Dynasty in the 19th century. When you get through the gate and look up, you will see on the central door, there are 5 carved men. The middle is Confucious and the four on both sides are his students who were also worshiped in the temple.

When you pass through the Portico, you will come to Nhap Dao Courtyard (Entrance to the Way). This section is filled with solemn old mango trees, fish ponds with beautiful lotus and waterlilies. Coming into this area will bring you a peaceful feeling like in the middle of nature.

The highlight of the section is Dai Trung Gate (Great Middle Gate).  The gate was built according to Le dynasty architecture (15th – 17th century). It contains three wooden gates supported by wooden pillars. The roof was tiled with red brick and include two carps at the top. Carp is very familiar with the dragon in Vietnamese culture. The legend says that when the carp takes over the Vu Mon ̣(Gate of Rain), it will turn into a dragon – one of four holy animals. The ground floor of the gate was laid with bricks from Bat Trang village – a famous traditional ceramic village of Red River Delta. 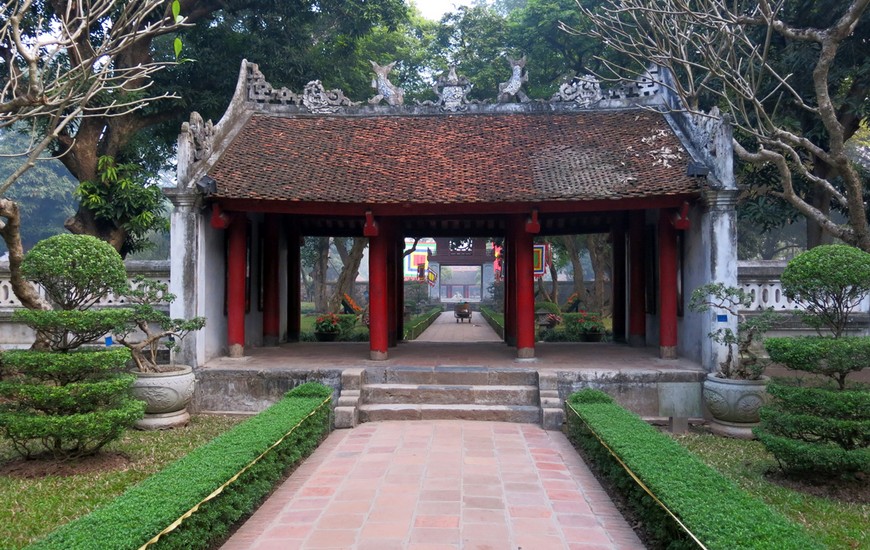 After Dai Trung Gate, you will come into Thanh Dat Courtyard (Gaining the Success). The architecture in this section is the same as Nhap Dao Courtyard. There is a big main road starting from Dai Trung Gate and leading to Khue Van Pavilion – the highlighted feature of the Temple.

Khue Van Pavilion was built in 1805 and became the symbol of Hanoi in 2012. You can easily see the pavilion on the 100,000 Vietnamese note. According to oriental culture, Khue is the brightest constellation of 28 constellations. Khue constellation includes 16 small stars that incidentally form the Chinese character Văn (文). That explains why ancient people believed Khue constellation could monitor the Van (literature). This pavilion has a unique architecture with four round windows and 2-floored roofs (eight roofs). 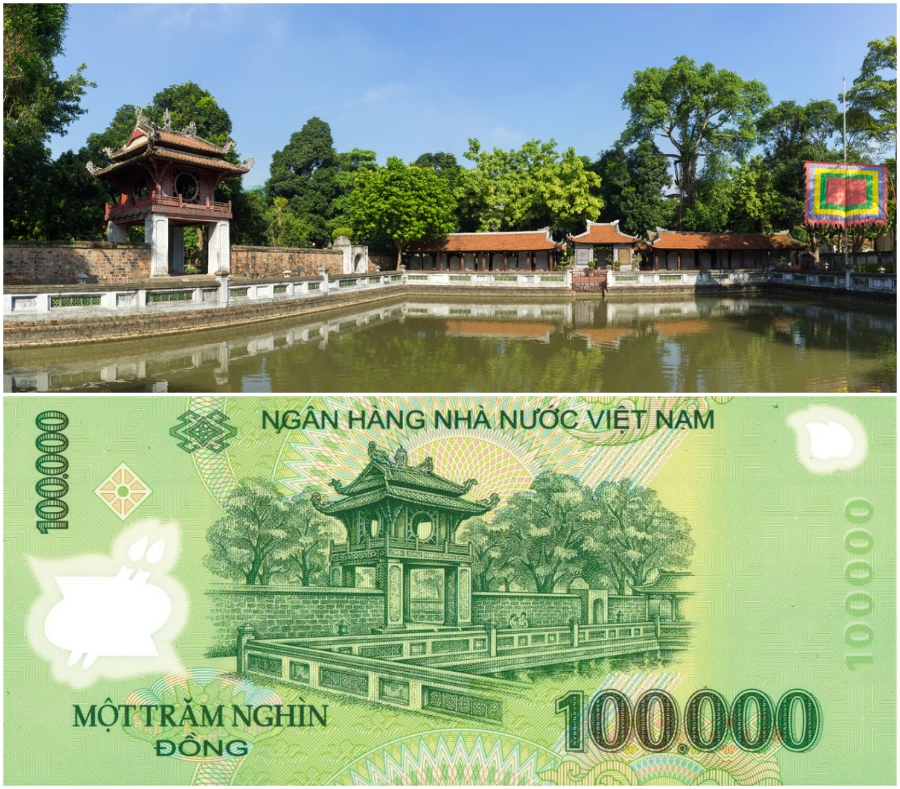 The next chamber is one of the most important sites of the Temple. Here remains 82 stone stelae above turtles’ backs. The stelae contain names of 1304 honored doctors of totally 82 national exams from 1442 to 1779. They have been of great significance for students of all time to encourage their studying. A few years ago, students had the habit that before exams, they came to the Temple of Literature to pray. And they rubbed the biggest turtles’ heads with a hope that they will bring them good luck. Now this activity has stopped to preserve the turtle but you can still see some big turtles with shiny heads.

In the middle of the garden is the square well Thiên Quang Tinh or Well of Heavenly Brilliance. The ancient well is surrounded by a brick banister and full of pure water all year round. 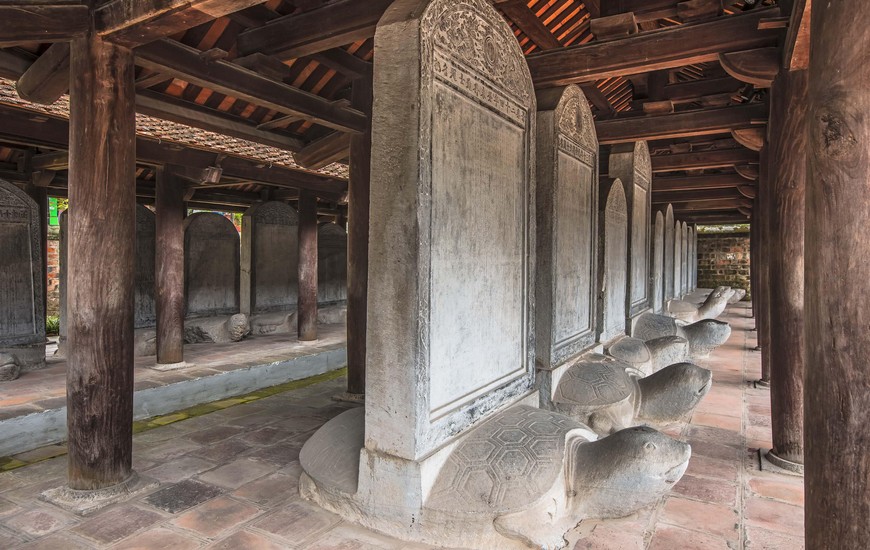 Dai Thanh Sanctuary ( Great Success) is the main section on the Temple. Here locates the Great House of Ceremony where they worship Confucious, his four most brilliant students: Yanhui, Zongzi, Zisi, and Mengzi. Here you will also see the biography of Confucious, his life and his theory. 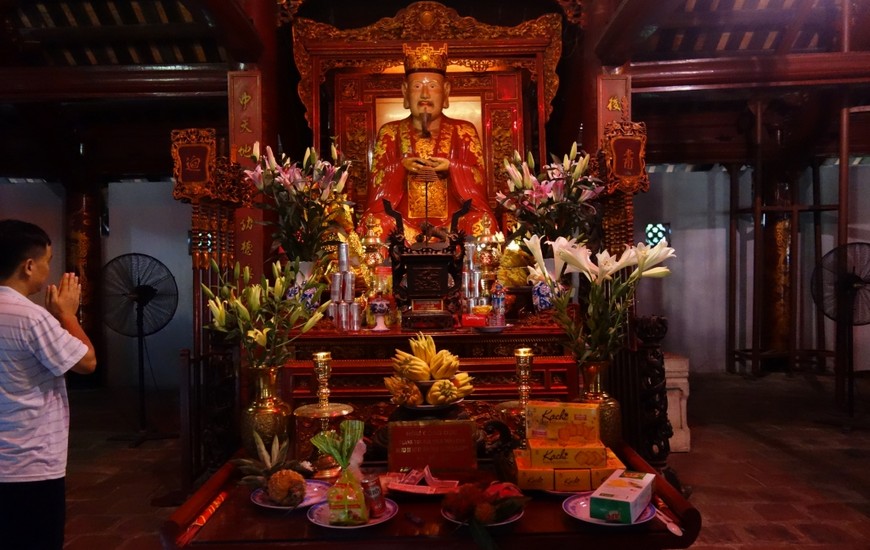 There are two important things in this section that you need to pay attention to. First it is when you enter the Dai Thanh gate, you will see in the middle of the yard an incense pot. The pot is made of bronze with dragons decorated on it. People say that the incense pot is the connector between the holy god and earth lives. There are always dragons or phoenixes on it which symbolize the heavenly god and royal king. It is a tradition of both Vietnam and China.

The second one the two crane stepping over turtle. They are both holy animals that belong to gods, which stands for purity, longevity and highness. People often have the habit to scrub from the neck of the crane to the turtle’s head. They think it is a sign of luck. 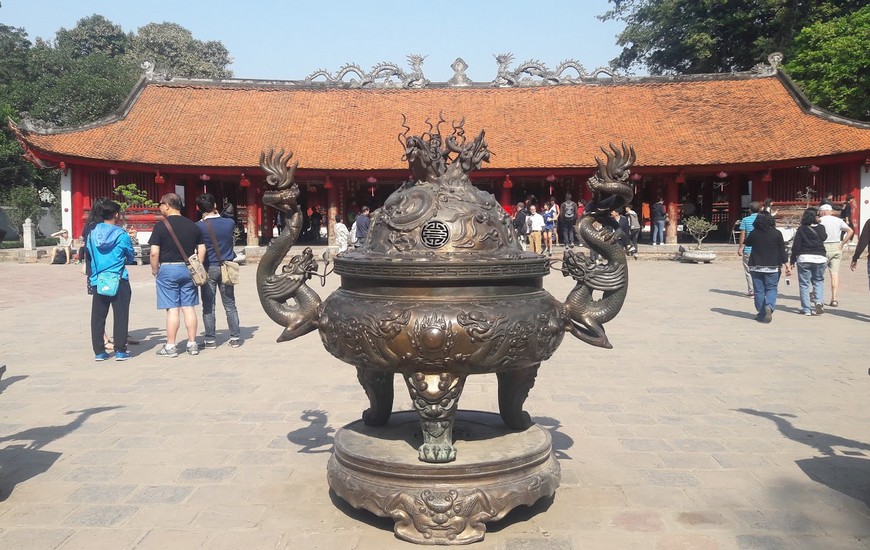 The last section is Thai Hoc Courtyard. This place is the first university of Vietnam. The courtyard was reconstructed in 2000 on the celebration of 990 years of Hanoi city on the former ground of Quoc Tu Giam. It still keeps most of the original school architecture from ancient times.

The main sanctuary of this section includes two storeys. The first storey is to worship Chu Van An – the best and most respected teacher of all time in Vietnam. He worked as the teacher of the royal princes and headmaster of Quoc Tu Giam under the Tran Dynasty in the 13th century. He was not only admirable for his profound knowledge, but also his virtue as a great mirror for the next generation. Around the ground floor you will also see the underground-excavated exhibition of antique belonging of students from 17th century

The second floor is for worshiping three kings that contributed to the construction of the Temple of Literature complex:

You can also get good pics at the giant drum and bell on both sides of the sanctuary. They are traditional things of schools under feudal reigns. Now people use them on special festivals or ceremonies. 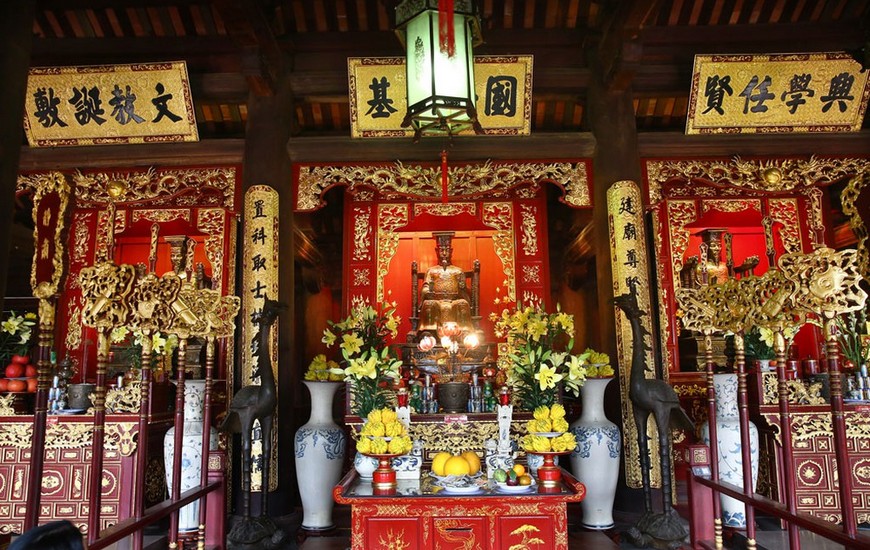 IV. Tips To Know Before Visiting 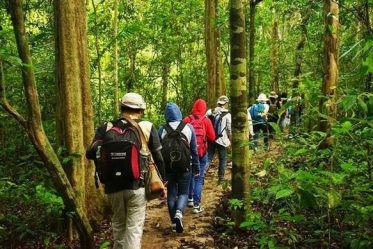 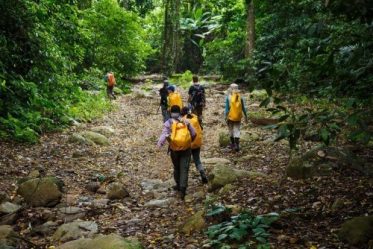 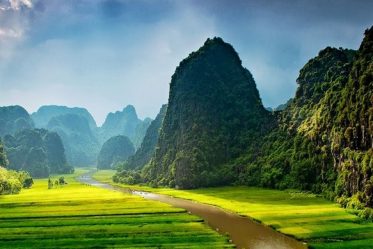 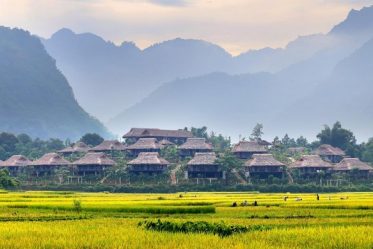 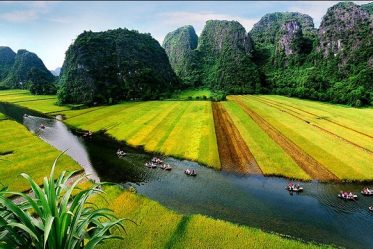 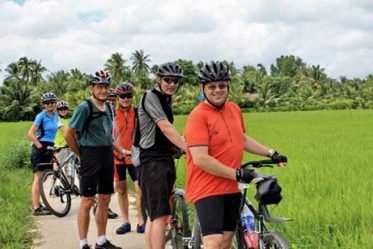 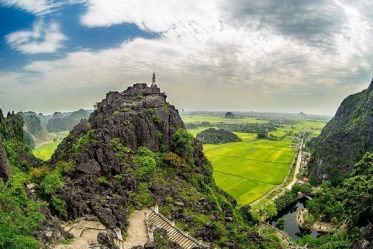